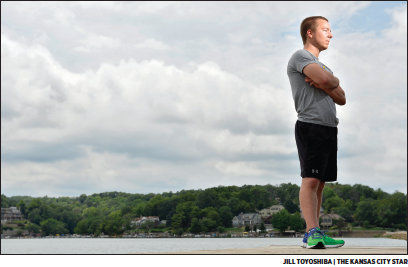 He began running, swimming and lifting. Harder than he ever had before.

He wasn’t eating enough to fuel his explosive workouts. People began to notice.

Even when family or friends commented about how much weight he had lost, he didn’t think anything was wrong. When he looked in the mirror, his muscles popped from his skin as if made of steel.

His time in the 400 barely budged. But a switch had been thrown in his head. If a little exercising was good, more had to be better.

The summer after graduation he began training for a triathlon. His father, Steve Sestak, figured once that was done his son would return to normal. Instead, he cut out all the fat and ate even less. He swam 40 laps at the gym, lifted weights and did cardio training. He swam the perimeter of Lake Quivira and ran five miles around it with a weight belt.

When his parents told him to stop exercising, he said he would. Instead he rose at 2 a.m. to run in the dark so they wouldn’t know.

In the middle of the night Lynn Sestak stood at the front door of her large, two-story house and stared into the blackness.

Her son was out there. Somewhere. He was already so thin, with a resting heart rate in the 40s. She worried that one day he might not come back.

“I thought he was going to die,” she said.

“Lynn,” she said, “his systems are going to shut down.”

Jon resisted. People were worrying for nothing, he insisted. He was fine.

His mother began to pray. In her car. In her bed.

Her father had died of a heart attack. She didn’t want Jon to be next.

Even though he heard the diagnosis, Jon never believed it. Men didn’t get anorexia!

At least that’s what he thought.

Micsko points to a statistic from the Austin (Texas) Foundation for Eating Disorders: More American men have eating disorders than prostate cancer.

The problem is worsened by shame.

“Men are much less likely to seek treatment for an eating disorder because they see it as only a female problem,” she said.

That can be deadly.

“Of all of the emotional disorders, eating disorders have the highest mortality rate,” Micsko said. “Ten to 15 percent of all people suffering from an eating disorder will die.”

More for men than for women, anorexia is triggered by a desire to achieve a certain body type or appearance needed for a sport or a job. They obsess with working out.

Jon’s weight fell to 128. Then 125. After running out of fat to lose, his body began to cannibalize his muscles.

Miscko said he was being brainwashed by his eating disorder, which she abbreviates and calls Ed.

“Ed was lying to him,” she said. “Ed does everything, like a goody enemy will, to protect itself. expired domains.net It says, ‘You’re fat! You can’t trust the mirror!’”

Hunter Holman, one of his best friends, said Jon began to change after graduation.

“In high school he was silly and fun,” he said. “But during (the summer) he was really boring. When everyone would hang out until 1 a.m. Jon would go how at 10 p.m.”

That fall, Jon began his freshman year at St. Louis University. Worried, his parents demanded he see a counselor and a nutritionist. But when he came home for winter break, they knew that wasn’t enough.

Friends knew it, too. He was freakishly skinny with a sharp, jutting jaw line.

Reports from his doctor weren’t good. Lab work showed elevated liver enzymes, a red flag for those with anorexia that their organs are overtaxed.

“Have you seen Jon?” his friend Morgan asked Hunter. “I went to hug him, and his shirt went in so much. He was just so little!”

His parents made written pacts with their son, which he soon broke. desperate, they called a family meeting. And for the first time in his life, Jon Sestak saw his father cry.

His parents gave him an ultimatum: Go to an eating disorder program. During his spring semester he went to McCallum Place treatment center in St. Louis.

He was still in denial.

After nine weeks he left the center. While he had gained back several pounds, he wasn’t better.

Feeling out of place at St. Louis University, he decided not to return for his sophomore year. Instead he wanted to go to the University of Kansas. He still had work to do. Last August, his parents sent him to the Eating Recovery Center in Denver.

While he didn’t gain much weight, he did start thinking more seriously about his condition and how to make himself healthier. Still, after a few months he checked himself out of that program, too, and used his own money to fly home. His parents immediately got him into an intensive program at InSight Counseling in Overland Park. Earlier this year he enrolled at KU for the spring semester.

No one knows exactly why Jon began eating again. He says he got tired of hurting his friends and family. His parents say it might be because they refused to pay his tuition until he stuck with his therapy. Then there was the counseling itself that might finally have started to repair his thinking.

Whatever it was, he stopped denying he had a problem and began to eat more. He even ate food with fat. Today his weight is back to a healthy 150 pounds.

“When I was down to my lowest point, if anybody had told me I’d be 150 pounds I’d be like ‘Hell no! That’s definitely not happening. I’m going to be some fat, stumpy guy walking around!’” 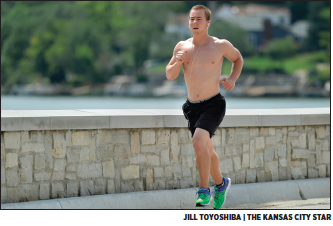 Jon Sestak grew so obsessed with hard exercise and restricted diet that his weight dropped to 119 pounds on a 5-feet-6 frame. Today he still runs, but in moderation.

His younger sister, Bailey Sestak, applauded him for his bravery, and her parents for handling a hard situation.

“It would have been so hard for me not to yell and scream and try to stuff food down his throat,” she said. “But they realized it was a mental problem. … I definitely give my parents credit. They were amazing.”

“I’m trying to recover and rebuild my relationships,” he said.

He knows he must be vigilant so he doesn’t relapse. More than anything he hopes he can be an inspiration to others.

“I’m so thrilled for Jon,” said Micsko. “He is so brave to come forward. … Because of his bravery, maybe other men will feel like they can pick up the phone and seek treatment, too.”

The National Association of Anorexia Nervosa and Associated Disorders, anad.org, offers a help line at (630) 577-1330, available from 9 a.m. to 5 p.m. weekdays. Or send email to anadhelp@anad.org.

To reach James A. Fussell call 816-234-4460, or email jfussell@kcstar.com.
Reprinted from the August 24, 2013 issue of The Kansas City Star. © 2013 The McClatchy Company.
For more information about reprints from The Kansas City Star, visit PARS International Corp. at www.mcclatchyreprints.com.

Filed Under: Articles, In The News
Insight Counseling offered advice for people with body image and eating disorders →